Written by Chloe Tillman, head of our sales desk

My focus is on sales, and I regularly engage with heads of internal and external business development teams. Most of these have been promoted internally, from sales positions, and it has made me wonder; is it better to hire internally or externally for management positions? How is a good manager made?

Being good at sales and being a good manager is, of course, not the same thing (think footballers who move into management). When working on non-management sales roles, I find that the focus is on sales skills, rather than product knowledge. However, whilst this is generally an accepted approach in distribution circles, the same hiring managers seem more resistant to the idea of employing managers from other industries.

The Peter Principle, coined in a 1969 book by Dr. Laurence J. Peter, illustrates the pitfalls of this approach; if firms promote the people who are best at their current roles, they will inevitably promote them until they “rise to the level of their incompetence.” In other words, the skillset that makes someone successful at one job, aren’t necessarily transferable to the next level. Thus, the organisation loses a top performer, whilst gaining, at best, an average one.

Sales is the ideal setting to test the Peter Principle, since the performance of both salespeople and managers are measurable. The Harvard Business Review did just that earlier this year, with revealing findings:

Their study concluded that better sales people tend to be worse managers. 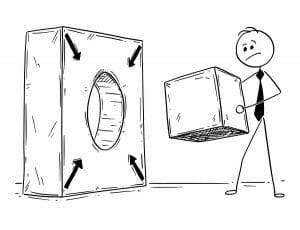 Accepting, then, that a top performer and a top manager might be two very different things, there is still the question of whether internal promotions or external hires are the best way to go.

Internal promotions have shown in a range of studies to act as a motivator for the whole team, as it demonstrates that the firm offers career progression. In turn, this can promote loyalty and performance. It is also often fast and cheaper (albeit you are now opening up another vacancy further down the chain), and you will obviously have a good understanding of the candidate’s capabilities and cultural fit.

However, there is also the flip-side, where the Peter Principle comes into effect, and newly promoted managers can also struggle with colleague perception, creating resentment and conflict.

For external hires, the short-term costs are often higher, ranging from advertising to recruiter fees. However, you will have a greater talent pool to choose from, and an outside hire will bring fresh skills, ideas and solutions.

Ultimately, it might be a question of thinking strategically around your firm’s long-term plans. Internal promotions often promote status quo, embedding your current culture and processes, whilst an external hire might be better suited to driving growth and change.

And if you hire someone new to management, what next?

In a study, CMI found that people in management positions are less likely to receive training than any other employee group. In fact, over 60% of new managers have reported that they received no training whatsoever when starting their new jobs, and this is matched by a similar percentage who underperform or fail in their first two years on the job (CEB study).

Does this point to a belief that management skills is something you are born with, rather than something you learn? As we often point out, the wrong hire can cost a firm 2.5 times the annual salary of the employee, so it is surprising that firms don’t invest more in their managers – especially as these are hires who greatly impact on the performance of others too.

Aside from the cost to the employer, this attitude is bad news for the failing hire too, as the bad habits they pick up in their early years are hard to unpick, and will mar the rest of their managerial career. Whether you opt for an internal promotion or an external hire, a solid induction and training programme is essential.

Many firms struggle to attract talented managers, but perhaps it is not talent that is in short supply, but investment in training and development, and a recognition of management skills as a separate skillset.